skip to main | skip to sidebar

*EXCLUSIVE OFFER:
Pre-order the new Dolly Parton 4-CD box set DOLLY and receive a FREE limited edition copy of A Real Live Dolly.*
$49.99
DOLLY - FIRST-EVER CAREER-SPANNING BOX SET
4 CDs, 99 songs - including SEVEN previously unreleased songs
Features her biggest hits, rarities, and duets from Monument,RCA Victor and Columbia
Introduction written by singer-songwriter Laura Cantrell, and new liner notes written by noted Dolly Parton historian Holly George Warren
Features never-before-seen photos and rare memorabilia!
A REAL LIVE DOLLY - EXCLUSIVE BONUS CD
First released in July 1970, and recorded earlier that year at Dolly's old high school in her hometown, Sevierville. Her performance was the highlight of the annual Dolly Day, a celebration held in Sevierville in honor of its most famous resident. It was arranged by Dolly's mentor and singing partner, Porter Wagoner, who also appears on several tracks. Long out of print on vinyl, A REAL LIVE DOLLY is now released on CD for the first time. The original set included signature Dolly songs such as "My Blue Ridge Mountain Boy" and "Dumb Blonde," but this exclusive, limited-edition CD also contains 4 bonus tracks.
*DOLLY boxset and bonus CD will be shipped to arrive on the 10/27 release date

*GO TO http://dollyparton.skyroo.com/se/view/music/index.html?&affcode=dpafb2
To Pre-Order Yours TODAY!!!!!!!!!! 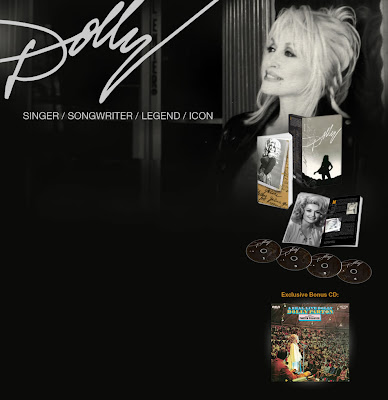 Dolly At 75th Anniversary Rededication & A Visit To Dollywood!

Wednesday, September 2, 2009, the 75th Anniversary Rededication Ceremony at Great Smoky Mountains National Park was held at the Rockefeller Memorial in Newfound Gap, on the very stage from which Franklin D. Roosevelt dedicated the park in 1940, several years after the park’s establishment in 1934. The Memorial was built by the Civilian Conservation Corps.
Among the invited guests were 10 Civilian Conservation Corps alumni who helped build the park, many of those families who were born in the park area but had to move to make way for its creation, and people who attended the original 1940 dedication.
Lots of dignitaries were present, but country music star and 75th anniversary ambassador Dolly Parton awed the crowd with her performance of two songs she had written in reverence of the park’s anniversary! (additional picture link at bottom! :) 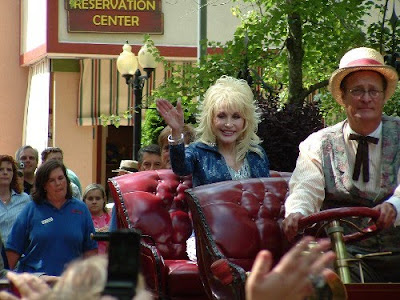 Dolly, Bill Plant Tree, Talk To Press Dolly on Friday paid a visit to Dollywood to recognize her Uncle Bill Owens for his efforts to restore the American chestnut tree, which included planting a tree next to the Backporch Theatre. At the event, she took questions, including about 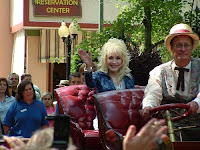 her legendary banjo instructor Applejack, who she said was a combination of Bill's Uncle Phillip Owens and another pickin' neighbor they called "Sawdust," and the park's upcoming 25th anniversary, about which she said they have several surprises planned, some of which they'll be announcing soon. She corrected a report that had appeared in the St. Louis Post-Dispatch a few days earlier and repeated here that she had attended two games of the St. Louis Cardinals. "You know I wasn't at that game," she corrected your webmaster. "I wish I did have time to go to a ball game." She said it was a look-a-like and laughed when a fan who dresses in drag claimed from the audience that it was he. When this reporter asked Bill about being singled out two days before at the Smokies re-dedication ceremony for his work on the chestnut, he said 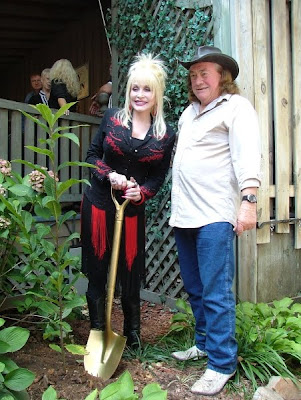 simply: "Best day of my life . . . I was speechless." Dolly interjected: "Bill is kind of shy. He can talk a lot if he's performing, when he's singing. But he gets all flustered when somebody wants to acknowledge him and pay him any kind of accolades. But anyhow I'm proud of you and think it's wonderful work that you've done." When your webmaster inquired whether she plans to tour in 2010, she replied: "I'd like to say yes but I'm not really certain yet. But eventually I'll get back out and do some things, but I'm taking off a little bit of time to write some stuff. I'm gonna write a musical of my own life. Course I had the great fortune to get to have '9 To 5' on Broadway. It's closing this weekend, actually, as far as the Broadway run, but it's gonna be going on tour next year, and I'm looking forward to that. And so I'm gonna take off some time and write some stuff and eventually do another tour." Dolly ended the day with a park tour. Check out a story on the chestnut ceremony from Knoxville's Volunteer TV here.
**ADDITIONAL PHOTOS - http://www.dollymania.net/smoke09-a.html
**ADDITIONAL VIDEOS - http://www.youtube.com/watch? v=XP0gklkfllo&feature=player_embedded#t=12 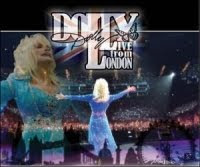 Little over a month ago that an e-mail blast from Dolly's official record label website, DollyPartonMusic.net, noted that her upcoming Dolly: Live From London DVD and CD would be coming out in October, a month earlier than the previously-announced November release date. Well, it has apparently been delayed back to the original planned time period. The latest e-mail blast, received by fans on Tuesday, noted a "near mid-November" release is now expected. No reason was announced for the change, although it noted that pre-order packages would be offered by the website starting in October. The CD and DVD are available exclusively as fund-raising premium items for PBS stations through September 30, although many stations have a four-to-six-week waiting period before delivery, meaning many fans who made charitable pledges in exchange for the releases may have them by late September or early October but still significantly earlier than the retail release in November.
Posted by DollyBoy925 at 4:49 PM No comments: 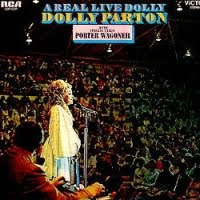 'Real Live' Has Two Unreleased Tracks The first-ever CD release of the 1970 A Real Live Dolly concert, first revealed by Dollymania earlier this week, will feature four deleted bonus tracks from the show, two of which have never been released before, Sony has announced. The disc, which will be a label-website-only exclusive bonus item for purchasing the Dolly boxed set directly from Sony, will feature both the "Just Because I'm A Woman" and "Coat Of Many Colors" live tracks that previously appeared as bonus cuts on the label's 2003 re-issue of Just Because I'm A Woman plus two additional previously unrealeased concert selections: "Daddy Come And Get Me" and "He's A Go Getter." These will be in addition to the seven previously unreleased tracks contained in the boxed set. The special bundle will be available online from the label for the same $50 price tag that most stores will charge for the boxed set alone (plus about $10 postage) for delivery on its Oct. 27 release date. Unfortunately for overseas fans, though, the offer will only be available to U.S. customers.
Posted by DollyBoy925 at 4:44 PM No comments:

Hello Thanks For Visiting My Blog! I Have Just Started This Blog So I May Keep People Updated I n The Bigg World Of The Little Person....Mrs.Dolly Parton! :) A Few Changes Will Be Underway! But Hopefully Be Done In The Next Week Or So! (i would like to thanks Dollymania for showcasing this page and the info!) I Will Update The Page As Offton As I Can! :) Hopefully We Will Get More Fans From Here To Showcase! Have A Great Week! ~Dollyboy925
Posted by DollyBoy925 at 5:32 PM No comments:

DollyBoy925
Hi Yall Im Aaron Hamby! Well im just gonna skip to the point IM A DOLLY PARTON FAN! and no its not because of her boobs!>>> ive loved the Mountains since i was little! The first time I ever Saw Dolly Was At the "Memories Theator" In Pigeon Forge TN! (But it was an Impersonator of Dolly! :) I Found It Cool To be surrounded by all those wonderful star impersonators! BUT I Never Took My Eyes Off Of The Dolly Impersonator! I saw a loving caring person in that impersonator and when I seen THE REAL DOLLY thats exacly what I saw! So Since That Day I have been a Monster Dolly Fan! My Dream Is To Grow Up Working At Dollywood because I always Loved The Mountains And what better way to spend time up in The Heart of The Smokeys then at DOLLYWOOD! And if anyone dont like Dolly Parton Its Because Yor Blinded By the Hair, Boobs And High Hills! So IF ANYONE DONT LIKE THE FACT THAT IM A DOLLY PARTON FAN I REALLY DONT CARE CUS THERES NOT A FORCE ON THIS WORLD THAT WOULD "Change It" (HINT,HINT FOR ALL YOU DOLLY FANS! :) Well Thats Me, Just a Backwoods Dolly Fan!